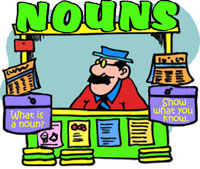 Let’s figure out what is a noun and what role it plays in the English language. First of all, noun is a part of speech which defines an object. This should not necessarily be an inanimate object (table, house), but could also be a living creature (girl, man). Not to mention that nouns could be not only material, but also abstract.

Love, kindness, knowledge – these are the abstract nouns, those that cannot be touched or put into your pocket.

So we could say that a noun is an object with a variety of its characteristics.

The classification of English nouns.

By meaning the English nouns are divided into Proper Nouns and Common Nouns.

Notably, many personal nouns became common nouns in the process of word formation (Take a bottle of champagne with you).

By formation the English nouns are divided into:

3. Compound nouns are made up of two or more simple words.

Also, English nouns are divided into countable and uncountable nouns.

Countable nouns are nouns that we can count

My friends always help me with my homework. ( friend – friends)

Uncountable nouns are little bit complicated. These may include several categories of words, such as:

And many other categories.

As usual, uncountable nouns in English could be both in the singular and plural forms.

This news is very depressing. (News – always in the singular)

The police did all they could to arrest the criminal.

I want to buy a new pair of jeans, the old ones are torn. (Police, jeans – always in the plural)

Some words in the context could be both countable and uncountable.

This toy is made of paper. (Uncountable, material)

I want all you papers on my table by lunch time. (Countable, papers here meaning documents)

The category of number in English

The plural of countable nouns in English is formed by adding the ending (club – clubs), changing the existing endings (wife – wives), and even by changing the base form of the noun (mouse – mice).

It’s hard to say whether there is such a thing as the category of gender in the modern English. In fact, there is only one suffix that is used to form a gender of a noun. It is a feminine suffix “-ess”, and it is used quite rare (host – hostess, waiter – waitress, poet – poetess).

Video tutorial which explains the classification of English nouns and gives a lot of audio examples of words and sentences on the use of nouns: